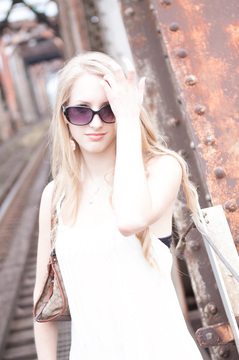 Melanie’s sophomore EP “Up In Lights” released in May 2017 alludes to the journey of self-discovery that has come with navigating the music business as a rising pop country artist since her move to Nashville where she attended Belmont University as a songwriting/English major.


Growing up in Pittsburgh, Pennsylvania, Melanie loved playing ice hockey, reading novels, and writing songs.  Melanie became an avid fan of country music, citing influences such as Shania Twain, Phil Vassar, Taylor Swift, Fleetwood Mac, and Miranda Lambert.  While her mom always played country radio in the house, her dad instilled in her a love of rock music.  Surrounded by Pittsburgh’s metal/rock/pop scene, Melanie’s songwriting and singing became a product of her environment: primarily country with an urban, pop-rock feel that comes from growing up in a Northern city.

Her first EP “All the Good Songs,” produced by Phil Ricciardi and Mike Puwal in 2012 was her first attempt at distinguishing a unique sound for herself, its songs drawing upon her real-life experiences at first love, loss, and self-reflection.

In the Spring of 2012, Melanie was invited to play a live set on the Billy Block Show, after she had been featured for 4 consecutive weeks with both showcased tracks off her EP and live interviews/performances on Nashville’s WSIX Locals Only radio show.  In the Fall of 2013, Melanie was nominated for a Nashville Independent Music Award (NIMA) for Best Female Country Artist.
She has had the privilege of opening for Little Big Town, the Commodores, Rick Vito of Fleetwood Mac, and Steve Augeri of Journey, as well as headlining many festivals around PA, OH, and TN.

Her second EP “has a little more edge and a little more honesty,” she says.  “I’ve taken the past few years to really come to an understanding about who I am, where I’m from, and what I want to say and it comes out in the music and lyrics of this project.”  Whether it’s showcasing her sarcastic wit in the title track, giving a shoutout to her roots in “Drugstore Makeup,” or portraying her slightly rocker side in “Lipstick on a Microphone,” Melanie’s sophomore EP is indicative of this artist's personality.  Her debut single "Lifeboat" reached #2 on the UK Hot Disc chart as well as charted respectably on the Music Row chart.  The music video premiered on Great American Country (GAC) as well as smaller and international syndicates.  Gaining multiple publicity mentions as an "Artist To Watch in 2018" in the Fall, 2018 saw the release of an "Up In Lights" music video as well as the November release of a new single, "Flame".  After releasing "Sober You" as a single in early 2019, the related video earned a spot on CMT's Next Up Now segment.